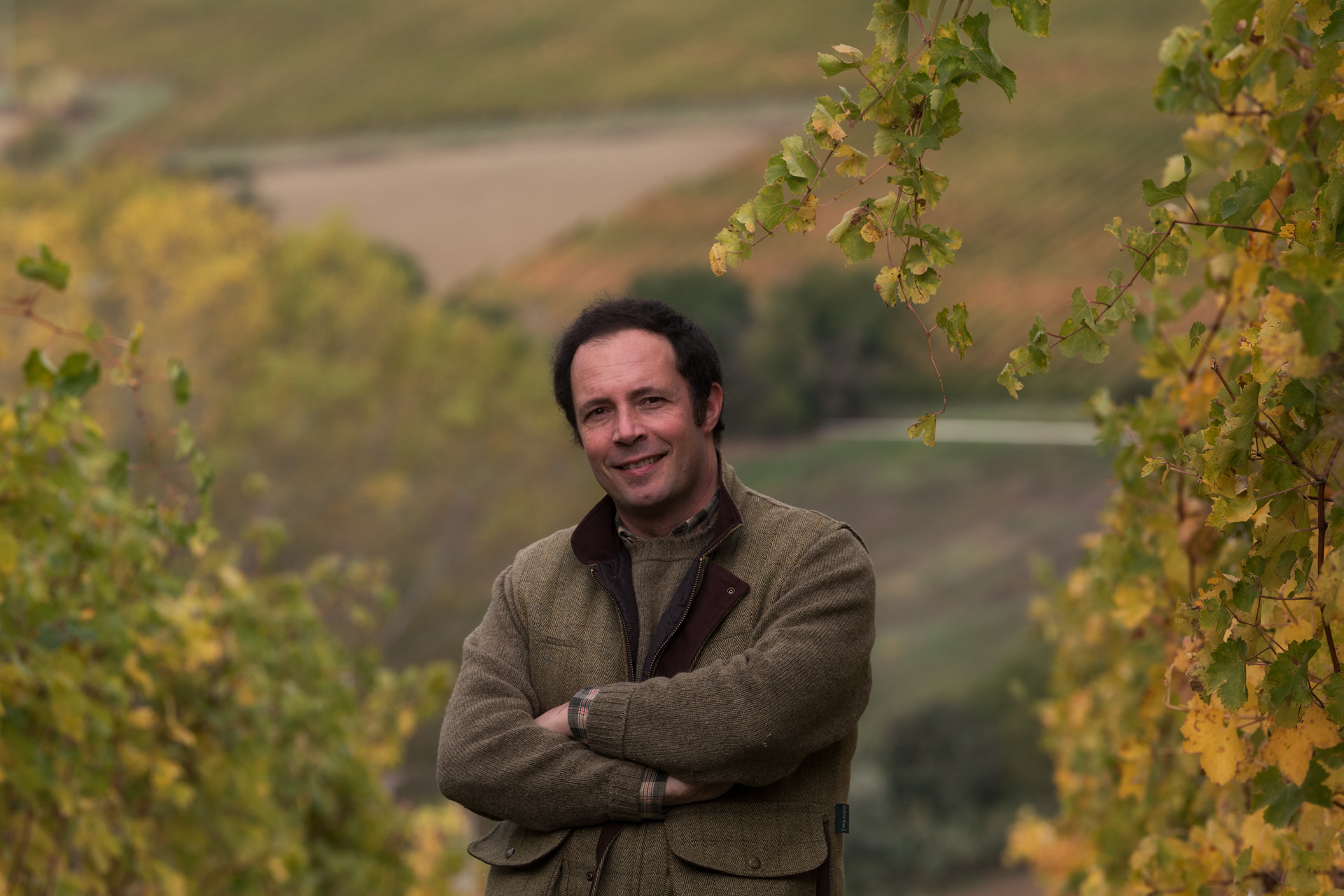 Among the hills that descend from Morro d’Alba to the Adriatic Sea, in the province of Ancona, we find a fiercely-independent winery. Marotti Campi specializes in the production of two grape varieties that, though very different from each other, are both inextricable from our image of wine in the Marche region: Lacrima di Morro d’Alba and Verdicchio dei Castelli di Jesi, both DOC.

The manager of the winery today is Lorenzo Marotti Campi, son of Giovanni and Francesca, who began the process of modernizing the vineyard at the beginning of the 1990s.

He explained to us what it means to grow wine here, what human sustainability means, and the importance of avoid generalization when it comes to winemaking processes.

Let’s start with the local conditions. The Vitigni d’Italia guide (Slow Food Editore, 2020) says of Verdicchio: “Concrete winemaking trials have show that away from the Marche region there is a general decline in its sensory potential.” What’s so special then, about the area where you grow it?

I don’t think it’s true that there’s a decline in the Verdicchio made outside the Marche. It’s an extremely versatile grape, and has an enormous variety of expression. Even within the same winery, where there are different vintage times and winemaking styles we get different Verdicchio wines.

Both Verdicchio and Lacrima di Morro d’Alba are strongly associated with this area; that much is true. They’re “typical” insofar as there’s a powerful and unique link between the variety, a land with specific characteristics and the development of human activity over the centuries. It must be said that within the Marche there’s wide territorial variety, landscape variety. We, for example, being in an area which receives the sea breeze, have longer maturation times for our grapes compared to wineries further inland. The Mediterranean climate, mitigated by the hills and the sea, gifts us with a land that’s particularly well-suited for winemaking.

With our “fresh” lands we have certain advantages, and this year there’s been ample proof. While there was record-breaking drought we barely suffered because the composition of the clay-heavy soils and their layer makes this land well-suited to vines and indeed to agriculture in general, as it retains a lot of water. Many other producers barely managed to harvest this year.

Then, as well as the climatic conditions, we must remember that in this area there’s a concentration of know-how thanks to the long and uninterrupted history of winemaking here. Verdicchio has a thousand-year history and has been selected in and for this area.

Regarding your wines: among the Verdicchio we have two aged in steel vats, one of which sur lie, and another aged in wooden barrels. Then there’s an orange wine fermented on skins for six months.

That’s one of the advantages of the Verdicchio grape: it adapts well to different winemaking method; there’s not just one way to make it. Albiano is our most simple Verdicchio, fermented for five months in steel vats. Its freshness and readiness are due to the fact that’s harvested a part, at the beginning of September, before the grapes we use for the other wines. For this reason our harvest period is very long, from August to October. Despite this differentiated harvest, it’s all done completely by hand.

About Volo d’Autunno, the “orange” one: I don’t want to give the impression that it’s in any way a defective or “dirty” wine like so many so-called natural wines are. This is only the third year we’ve made it, it’s an experiment, and as it’s an experiment the time that it rests on the skins has changed each other, from four to six month. We let it macerate to draw out the antioxidants in the skins, and to develop tannins. The winemaking process is rapid, in any case. The color is certainly darker than the others, but I wouldn’t necessarily definite it orange. Our local area doesn’t have the pH levels in the soil required for a true orange, as we might find in Slovenia or Georgia, for example.

Marotti Campi will be present at the Slow Wine Fair with their wines. Check out their wine list!

And how is Lacrima di Morro d’Alba adapted to the area?

Lacrima is difficult to grow and even here, in its cradle, it’s always been problematic. It was disappearing, before it became a DOC, for this very reason: not because it’s not good, but because it’s a particularly challenging grape. When it became a DOC in 1985 there were only seven hectares of it left. The majority had been ripped out in favor of other varieties.

Nowadays there are 250 hectares of Lacrima, of which 40 are ours. It’s no longer at risk of extinction, but it’s not a flexible variety like Verdicchio; making wine with it is complicated. We might say that if Verdicchio is a well-explored territory, a book already written, then with Lacrima we haven’t yet finished the first chapter.

When we built our new winery in 1999 and started the Marotti Campi label, the total number of hectares of Lacrima was 50, of which 25 were ours. We didn’t even bottle it, so small was the production. It was seen as a novello, made with a carbonic maceration that accentuated the aromas but at the expense of its aging potential. It was drunk in its first six months, as if trapped by a misconception.

There then followed a phase of experimentation during which we discovered some quite serious problems. The vines develop faults from around 20 years of age and it doesn’t make economic sense to try and prolong their lives beyond that. They’re condemned. While Verdicchio vines can easily live 60 years or more, with Lacrima there’s a 20 year life expectancy, after which we need new grafts. So the vines that we have now are already the second generation. They key characteristic that the new ones have is that they give us sparser bunches, and so we’ve had to push back the harvest from mid-September to October.

What does the word “sustainability” mean for your winery?

Sustainability is a wide concept that can be interpreted in different way. First of all, for us the idea of energy independence is important, and we almost totally independent in that sense. Our winery has solar panels installed to that end. Secondly, our viticulture doesn’t make use of irrigation. We use green manure, even among the old vines on steep slopes, despite the complexity of the task, which requires specific tools and a significant amount of time. Lastly, but not less importantly, there’s the human sustainability of the winery. We have workers who’ve been with us for four generations. Our vineyard manager, is son and grandson of previous vineyard managers, and now his son works with us too. We pay above-average salaries because we want to create long-term relationships based on mutual trust with the people we work with. For us, the most important thing is that we’re a totally vertical winery: every process from the vineyard to bottling is performed in-house, so we have complete control over every aspect of the work we do. Many commercial producers can’t say the same.

We’re a farm first and foremost: as well as the 56 hectares of grapes we own and the 15 hectares we rent there are another 70 hectares dedicated to other crops. An equal division between wine and not-wine, in short. This area is traditionally associated with wheat, which we also grow. Then there are fields dedicated to sunflowers, as well as all the other typical vegetables of the region. So biodiversity is present, and we have no intention of transforming those hectares into grape vines: that way we’d become just another monoculture.

The Slow Wine Fair: an opportunity

What sort of opportunity do you think the Slow Wine Coalition and the Slow Wine Fair represent for yourselves and other winemakers, and indeed, for Slow Food?

We’ve been among the main supporters of Slow Wine since it started. We’ve participated in numerous tours of the United States with Slow Wine, and beyond. We believe in what it represents: a clear form of communicating wine, with little rhetoric, one that doesn’t try to sell abstract concepts. The only truly important concept for us is the idea of the origins, the roots, the land… the nature of wine. This is one of the reasons we’re also members of FIVI (Federazione Italiana Vignaioli Indipendenti): to raise awareness among a market what that market hasn’t yet understood.

The current situation, looking at it from a wider point of view, is extremely worrying: 70 or 80% of the wine the world drinks is nobody’s child, anonymous liquid masses that travel around the globe, the result of a race to the bottom. It’s a bad system. There are hundreds of thousands of small-scale producers, but collectively we’re just a small portion of a wider market dominated by two or three big groups. There are industrial groups that sell ten times as much wine as all the members of FIVI put together. So can we change course? Improving the level of consumer awareness would be a start, promoting the idea that we can support farmers with our choices, and establish a more authentic link with the land. If we were able to convert just 10% of the market we’d be able to feed all the small-scale producers, their workers and their families.

All photos courtesy of Marotti Campi.