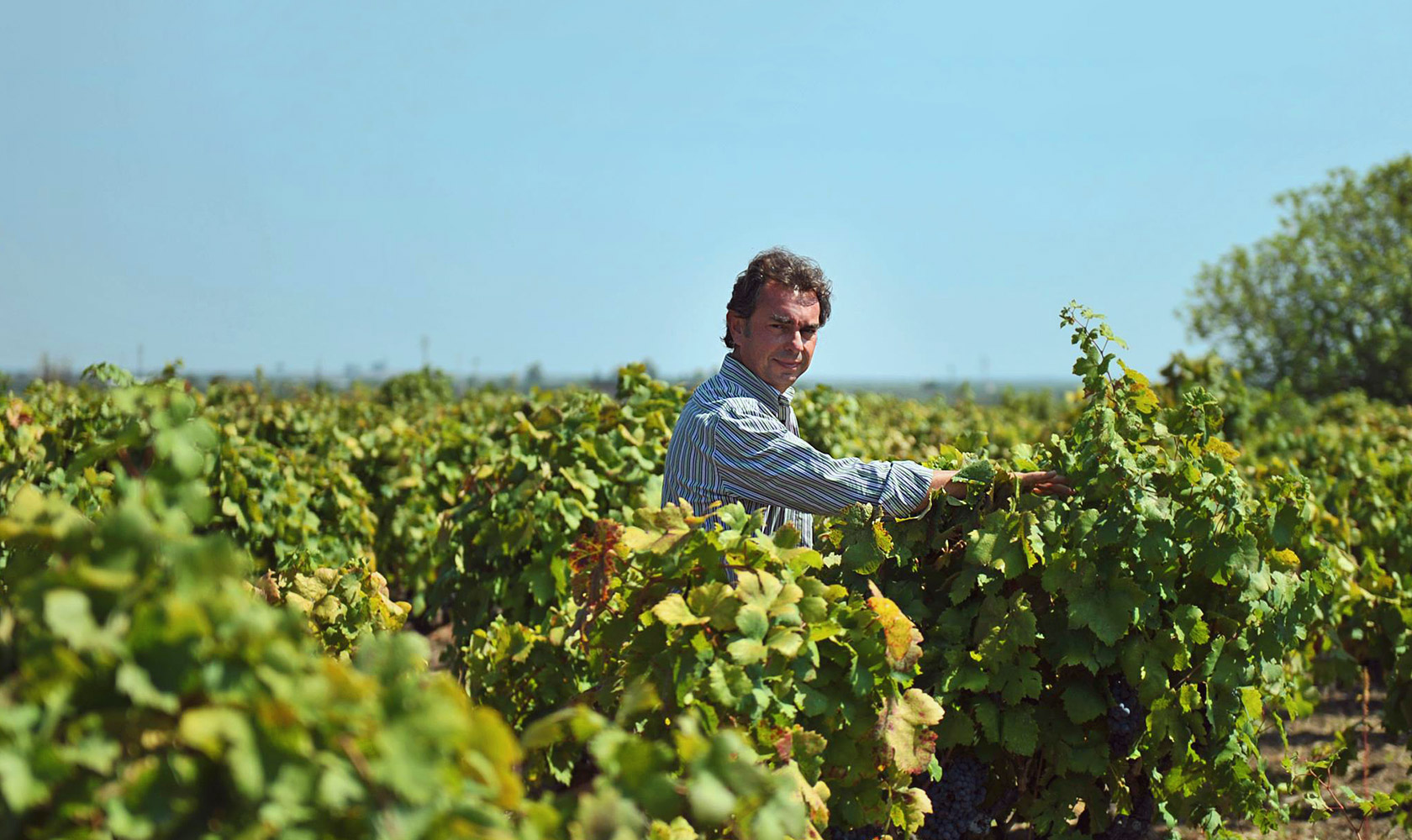 The sophistication of Primitivo

It wasn’t long ago that the Primitivo grape was mainly used to add character and robustness to blended wines made in northern Italy. But there’s been a change of fortune in the last 50 years, particularly since Primitivo di Manduria became a DOC in 1974. One of the protagonists in this revival and reevaluation of the Primitivo grape is Agricola Felline, a winery in Manduria itself.

As well as exploring the potential of the grape through their wines, they also host an annual conference dedicated to research on the similarities and differences between the Primitivo grape and its closest cousins: Zinfandel of California and Crljenak of Croatia.

We spoke to owner Gregory Perucci about how Agricola Felline has assisted in the “evolution” of the Primitivo grape.

The sea and the soil

For those that don’t know: where is Manduria?

Manduria is the world capital of the Primitivo grape, its natural home. It’s situated in the heart of the Salento peninsula, with a vast area of vineyards stretching from the city (76 meters above sea level) down to the Ionic coast. The distance from the sea is a characteristic element for all winemaking in Salento, and in Manduria in particular. The sea mitigates the winters and refreshes the summers. The other key element for this low-lying land is the soil: the variability in its geological composition affects the growth of the grapes and their harvest.

Your winery has over 40 years of history, is that right?

Considering the various transformations the business has been through, our history is much longer than just the last 40 years, though the last four decades have been expressly dedicated to the quality of our bottles. My grandfather, before he left to go to war, was a noted local vine pruner and grafter. After the agrarian reform he helped the new small-scale farmers who’d received lots of land expropriated from the landowning class to plant their own vines. When they began to produce grapes they made wine in the tanks used for pressing and fermenting the must.

My grandfather and my father began to work as intermediaries between these small-scale producers and some of the wholesalers in the north of Italy who bought bulk wine. This business increased enormously with the advent of the European Common Market in 1969, as the French began to buy large amounts of full-bodied Sicilian and Pugliese wines. My father, Costantino, was selling 100 million litres a year at one point!

What’s changed over the years, and what’s remained the same?

Almost everything has changed: from the viticulture to the winemaking process and the market. The bulk wine market has become national. The subjugation of the South to the northern entrepreneurship has remained the same: businesses from Veneto, Tuscany, Trentino and now even Sicily buy huge quantities of bulk wine, heavily influencing the market, or else they come here to Puglia to buy land, vineyards, wineries and produce Pugliese wine for themselves. Our answer to this “colonization” is our Anarkos wine.

A Primitivo for every soil

Your Primitivo di Manduria Giravolta was selected as a “Top Wine” by the Slow Wine Guide 2022. Why might that be?

Giravolta is a Primitivo from vineyards planted on banks of limestone. These are fresh, well-draining soils which are also porous, capturing water and releasing it slowly through the roots. The harvest comes late, after the vineyards in sandy soil or clay soil. It’s an elegant and balanced wine with notes of cherry and blueberry, and in 2018 these were the soils that expressed the finest Primitivo.

Agricola Felline will be at Slow Wine Fair with their wines. Check out the wine list!

While Giravolta comes from limestone soil, Dunico comes from sandy soil and another Primitivo is grown in clay soil. How does the soil affect the wines?

The composition of the soil and the distance from the sea are the two most important variables for a Primitivo wine. Clay soil is rich in iron, and is also the most common in the area. This gives us what we think of as the traditional Primitivo di Manduria, with notes of ripe cherry in the nose, fruity sweetness and soft tannin in the finish.

The sandy soils here host only a small number of vines which have survived unauthorized construction activities. They’re old vines, and not as productive. For decades they’ve been exposed to this poorer soil and the salt which the southern winds deposit on the grape bunches. The harvest is very early: around the third week of August. The maturation happens during that period of the greatest temperature difference between day and night. It gives us powerful wines, concentrated and complex but extraordinarily balanced, spherical and long-lasting.

The black soils have alluvial origins: they come from the decomposition of forests through rain, creating deep and fertile earth. This is where we find the most productive vines for Primitivo; the phenological cycle is longer (with harvest at the end of September) and the wines have a notes of spice, as well as a greater concentration.

It’s interesting to read that you also make a Californian Zinfandel, considering the studies which the University of Davis and the Institute for Experimental Viticulture of Conegliano which have suggested that Zinfandel and Primitivo may be one and the same variety.

We’ve been an active part of the debate on the difference and similarities between Primitivo and Zinfandel together with colleagues and researchers in the United States and Croatia. Since 1997 we’ve been the only non-American members of  Zinfandel Advocates and Producers, a Californian association dedicated to promoting what the Americans thought to be the only grape variety which hadn’t been imported from Europe. The Zinfandel which we produce is part of these experiments conducted between Manduria and California. During a visit in the pruning period to one of the most interesting vineyards, the famous Geyserville in Alexander Valley, owned by Ridge Vineyards, I bought some scions which we grafted in Manduria alongside a Primitivo vine, to study the differences.

What other plants are there around your vineyards? What biodiversity is there?

With the agrarian reform after the Second World War the farmhands received a plot of land to work. The oft-replicated development model here was to plant grapevines to make wine (and money), but also to leave some space for a small vegetable garden, a few fruit trees to provide shade in the summer, aromatic shrubs (oregano, rosemary, sage). With the merging of these plots, these more diverse spaces were reduced in size. The modern tendency is to use as much of one’s land as possible to grow vines and optimize the land for the use of machine tools.

What we try to do is not just to keep a few old fruit trees around, where we find them, but also to let spontaneous vegetation grow, which we often find in our drywalls. In this way, the vineyards become a living habitat for diverse flora and fauna: fruits, flowers, herbs and vegetables can prosper here… in the vineyard there are butterflies, birds, insects, reptiles and innumerable organisms in the soil. Their interactions guarantee a stable and self-regulating ecosystem, which we’re convinced improves the quality of the terroir.

Regarding vegetation, the most typical varieties we find among the vines are mastic, rosemary, rockrose, lavender, lupine; fruit trees like fig, apple, pear and quince, almond, apricot; wild trees like olive, mock privet, evergreen oak and carob. There are numerous varieties of wild vegetables, too: chicory, chard, Swiss chard and rocket.

Why have you decided to come to Slow Wine Fair?

It’s a great opportunity that comes at the right time. Before the pandemic we were already in a period of great confusione and fragmentation regarding values, principles and ideas for the future of wine. Generic questions from buyers were met with limited and self-referential answers about organic, biodynamic, natural or orange wine… The Manifesto gives a clear indication of what responsible and modern winemaking can be. Being part of that and coming to the Slow Wine Fair, a moment of exchange where we can guide our market towards the values of sustainable agriculture; it’s something that’s in all our interests.

SLOW WINE FAIR, FROM MARCH 27-29, 2022, AT BOLOGNAFIERE, IS AN INTERNATIONAL EVENT DEDICATED TO GOOD, CLEAN AND FAIR WINE. #SLOWWINEFAIR

All photos courtesy of Agricola Felline