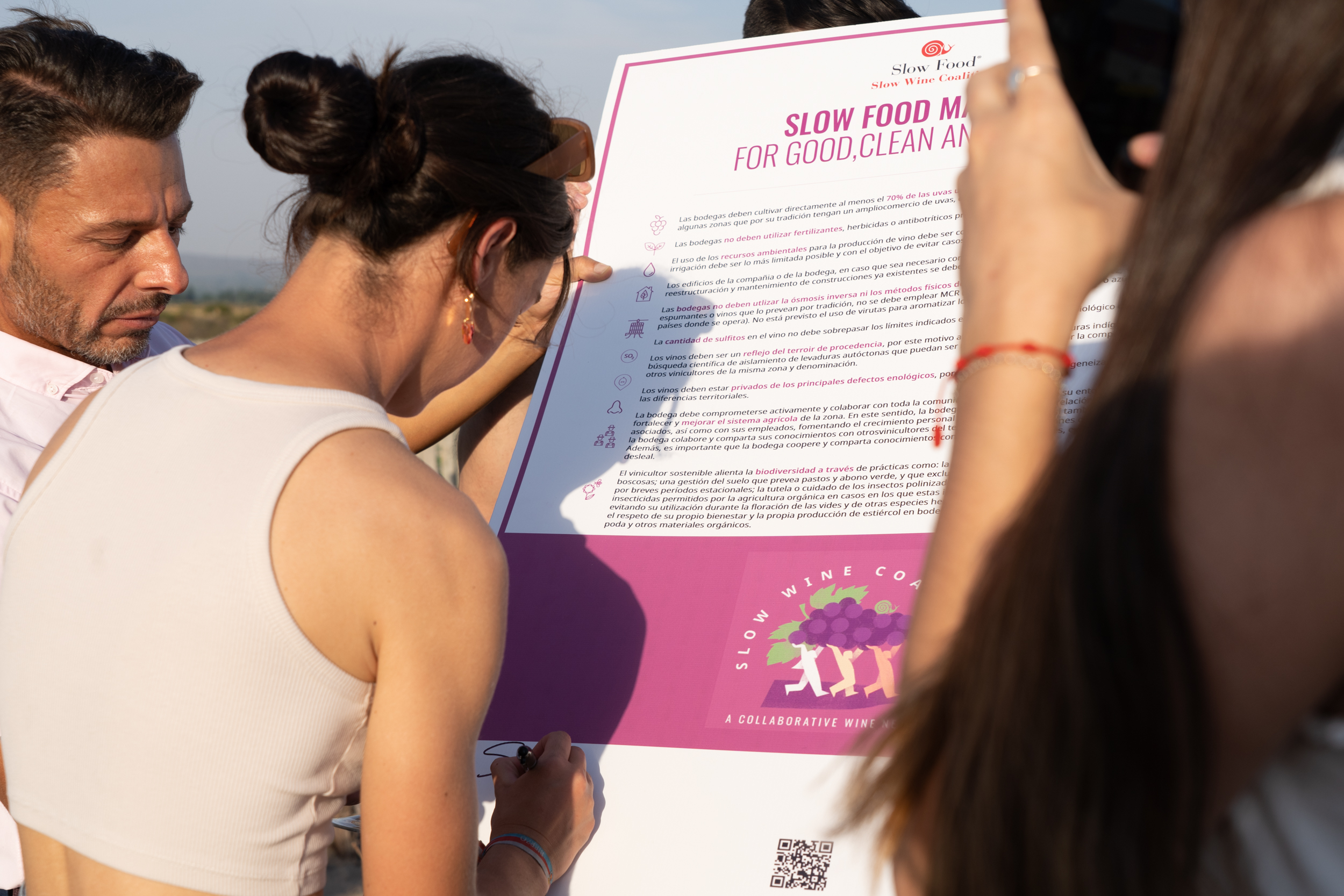 The Slow Wine Coalition expresses itself in different ways around the world. In some countries, like Macedonia, it’s a tool for approaching the legal framework around wine production. In China it’s an opportunity to develop an as yet little-explored aspect of the country’s agriculture. In other countries that identify with a certain type of winemaking it’s already become an expression of community.

This is the case with Slow Wine Latam, where Latam is short for Latin America: The network extends across countries – Argentina and Chile most of all – that are trying to redefine the identity and socio-cultural role of wineries; the contribution that they can offer in the fields of environmental sustainability and protection of the landscape.

One of the people promoting the Slow Food Manifesto for good, clean and fair wine in the region is Juan Gualdoni, a young enthusiast and member of the Slow Food NO-BA Gastronómica Community, who works to raise awareness around food systems.

Tell us a little about you. Who are you, what do you do? How did your work with Slow Food start?

I’m from Argentina and that’s where I work, though I studied in Italy, in Bologna. That’s where I did a Master’s degree in International Relations, and also where I got to know Slow Food. I worked for a while in the offices of Slow Food International, where I managed relationships with the network in Latin America. I’m strongly interested in gastronomy, but in recent years I’ve also become more passionate about the world of wine. Today I work with small- and medium-scale producers to help them develop new market strategies. I’m interested, in particular, in native yeasts and natural wines.

How did the Slow Wine network in Latin America start, and who’s part of it?

How did the Slow Wine network in Latin America start, and who’s part of it?

As with so many other instances the network was born from a need that was both felt and shared by many producers. Sharing experiences, problems and solution. In doing so, and by presenting ourselves as a group, there were greater opportunities to be heard. For now, the Slow Wine network is made up of them: the winemakers. The objective, however, is to extend to others, to those who work with wine in other ways. Chefs, for example, could have a great impact where their restaurants reflect the same idea of agriculture in their menus and wine lists.

With the evolution of the network it would be nice if we could welcome many of them, and communicate to consumers that certain restaurants are worthy of our attention not just because they cook with Slow Food Presidia or Ark of Taste products; not just because they promote campaigns like Slow Meat and Slow Fish; but also because their wine lists only contain bottles that reflect values of environmental sustainability and protection of the landscape; that have a social value. Wines that reflect the values of the Slow Food Manifesto for good, clean and fair wine.

Have there been people signing from many different countries? Beyond Argentina, which I imagine is among the best-represented, what are the other main countries involved?

Argentina is, together with Chile, the country with the strongest winemaking tradition in Central and South America. So of course Argentina and Chile are the most-represented countries in the Slow Wine Coalition. Argentine and Chilean producers, at the same time, create momentum for producers from Peru, Uruguay, Brazil and Mexico. In many of these countries stories that are worth being told are emerging. Among them, the production of wine in ancient amphora in Peru, a tradition that goes back to the 1700s, or the wines of the Brazilian enologist Marina Santos, a paladin of natural wine; then there are the wines of Michelini, an entire family dedicated to viticulture in Argentina.

Many people associate the idea of Argentine wine with monoculture and an industrialized production process. What do you want to communicate to the public of the Slow Wine Fair in Bologna, and the Slow Wine Coalition more generally, in this regard?

Some may erroneously think that Argentine wine is a modern phenomenon. But that couldn’t be further from the truth. Though it only started to be export in great quantities in the 1990s, the roots of Argentine wine are as old as the continent’s colonization. They go back to the 16th century. The first vines were planted in Mendoza in 1550, and of course at that time it was all organic! But today, for many, Argentine wine is – correctly, in so many cases – associated with a highly-industrialized production process. Argentine agriculture is largely practices on terrains of enormous dimensions: that’s how it is for soy, and also for the cattle farms and indeed for much of the wine.

If one thinks of an Argentine wine, it’s easy to think of a Malbec produced by some enormous winery that cultivates hundreds of hectares. Yet we also find small- and medium-scale winemakers in Argentina who make territorial wines that use lesser-known grape varieties and native yeasts. These are the producers we want to give space to, so they can tell the world that Argentine wine isn’t just Malbec – just as Chilean wine isn’t just Carmènere – and that beyond the big brands there’s much to be discovered and tasted.

What are the challenges for the future?

For me the main challenge is making sure that big business doesn’t appropriate all the hard work we’ve done; they may seen commercial advantages in producing “natural wine”. But I’d like that the term “natural wine” or “sustainable wine” were not standardized with inadequate criteria.

I’d like to work to build a network that makes sense, that constructs an idea of what natural wine is collectively, that demonstrates the significance of environmental sustainability and the importance of collaboration, where the role of each individual is defined in relation to the role of others in the same network.

An example? Mendoza is probably the region that’s best-known for wine production. It’s a desert region, a land that has been facing serious problems caused by the climate crisis in recent years. There are torrential rains, real floods, that historically we never saw. At the same time, the availability of water resources is extremely limited. All these aspects must be managed collectively by the community, by the network.

While in March the Latin American winemakers will be in the middle of harvest, one of their delegation will be present at the Slow Wine Fair and the meetings of the Slow Wine Coalition in Bologna. See you there!

Cover image: Signing the Manifesto at Sitio La Estocada, Tupungato, Mendoza, with the Michelini family. More than ten producers were present to speak about slow wine, sharing a slow menu as they discussed their common issues.