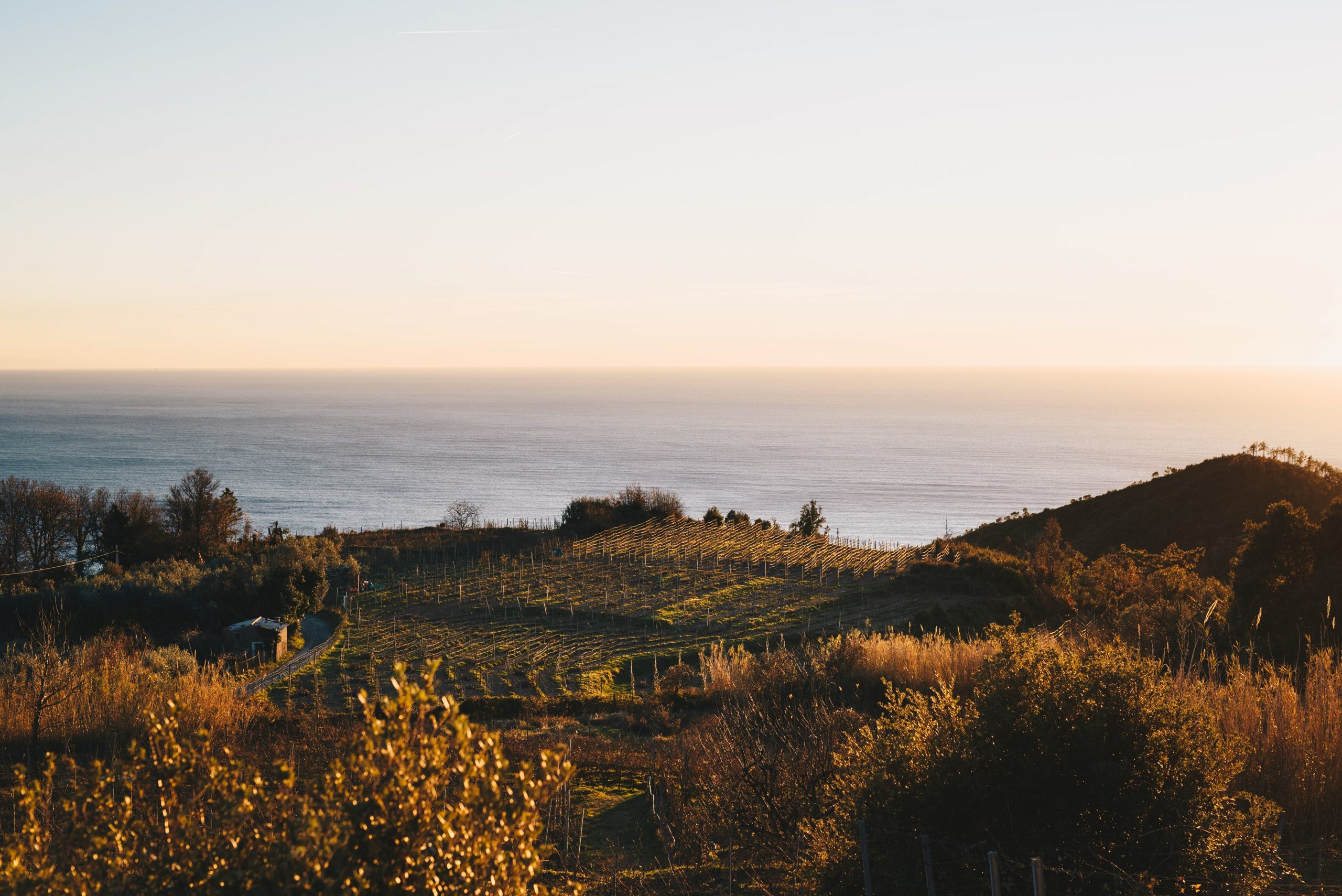 Italy is full of paradises, but they often go unrecognized. There’s just such an abundance of enchanting places: it’s hard to appreciate them all. But, fortunately, some of these forgotten wonders are being rediscovered and given the care they deserve. One such place is Cà du Ferrà, in Liguria.

Bonassola is a small town of just 800 people near La Spezia, close to the border of Liguria and Tuscany. Cà du Ferrà literally means “house of the blacksmith” – and once upon a time horseshoes were made here – though today it hosts an agritourism and winery.

We’re just 400 meters from the sea here, but those 400 meters are nearly entirely vertical: indeed, from the vineyards we have a wide panorama looking out over the cliffs. As Davide Zoppi tells me: “On terse days you can see Corsica, Capraia, Gorgona and Elba, Versilia, Punta Ala, even Cap d’Antibes… It’s a priceless view across the Mediterranean.”

History of a paradise lost (and regained)

Yet it wasn’t always like this. Because both Cà du Ferrà and the people who manage it have gone through important changes in their lives.

That’s where I ask Davide to begin his story. The story of the winery, but also of his parents and of his partner, Giuseppe. They’re all stories that stray from the beaten path.

“My mother Aida was from Campania. When she met my father, Antonio, who is from Bonassola, she had a clothes store, and he worked in construction. They fell in love with each other and with this land, the Ligurian Riviera. My mother came from a family of winemakers – her father, grandfather and great-grandfather had all made wine near Benevento.”

Recovering the land is a slow and gradual process, and continues even now…

“My parents started with four tiny parcels of land, covered in thorns and devastated by wild boars. These were the first lands of Cà du Ferrà, and they’re lands where there had once been vines around 70 years ago. They ploughed ahead, little by little, buying, restoring and planting new plots of land. The agritourism was a similar operation, renovated from the ruins of two older buildings.”

The winery now has around four hectares of land spread across different plots. After studying Law and following a career as a magistrate, Davide came back to the land to join his parents both in making wine and restoring the uncultivated terrain. Though as he sees it, there’s a consistency between his current path and his old one.

“Giuseppe and I met each other 15 years ago and 5 years ago we finally got married. We lived together in Milan and Rome and traveled abroad extensively. He wasn’t a winemaker nor did he work in the sector, but as with all of us, he changed his path. Today it’s the four of managing the business, together with some collaborators.”

Cà du Ferrà  will be at Slow Wine Fair with their wines. Check out the wine list!

The beauty of second chances

If one wanted to find a common thread to the strands of this story it might “second chances”. Second chances for abandoned lands that return to the splendor the vineyard, of people from other walks of life who become winemakers later on. But also for the traditional grape varieties which are also being recovered, and once again giving us wonderful wines.

I ask Davide to tell me about their range of bottles.

But Bosco isn’t the only grape variety you grow…

“No, of course not. Many of our wines come from the recovery of native varieties, sometimes almost abandoned. What we’re most dedicated to right now, and which unfortunately we won’t be able to bring to Bologna, is Ruzzese. It’s a white, pre-phylloxera variety, once cultivated in the eastern part of the Ligurian Riviera. It almost disappeared completely, because of the phylloxera plague, which decimated all the vines in the area.

“Recovering it the right thing to do, and it makes sense: for cultural, historic, agricultural and enological reasons. It was once drunk in the court of Pope Paul III with his sommelier, Sante Lancerio, in the 1500s. The Pope liked to drink this precious nectar with figs, a marvel which we’ll be bringing to life very soon.”

Our chat with Davide doesn’t last long. Yet in this brief talk I think we can find all of the principles espoused in the Slow Food Manifesto for good, clean and fair wine…

Davide summarizes the winery’s philosophy: “Good for us means maintaining the characteristics of the grape variety and being passionate about its history; that’s how the only way to ensure a sustainable future for it. And that’s why we’re coming to the Slow Wine Fair why we’re coming to the Slow Wine Fair, from the opening plenary session on March 27: we want to talk to others who see wine the way we do: as a cultural product. And with those who, like us, think that winemakers should have a political and social role too, in the public sphere.”

Up until now it would seem that your production philosophy has been rewarded… but as so often I like to ask the producers I speak to about 2020. How did it go for you?

“For us it was an extraordinary year. We already had an attitude of resilience, and we brought it to bear. All the things that we weren’t able to do with the world of hospitality because of the lockdown, we did it in private, thanks to our network “Ambasciatori Cà du Ferrà”. It was an important year in the field of investments, too, which we didn’t stop making. Because investing in the land is good, and fair.”